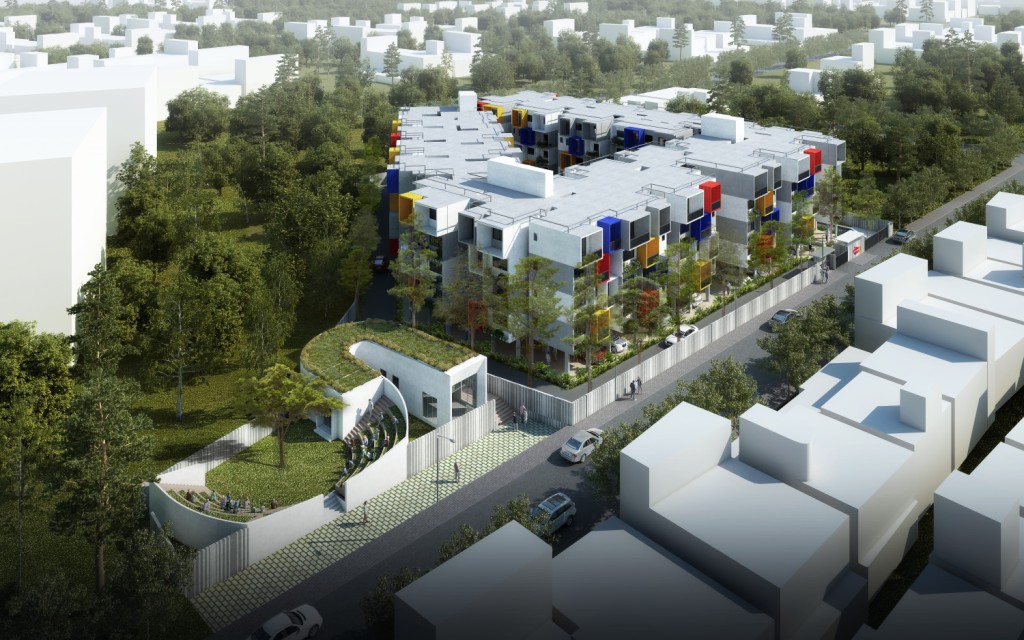 Urban development points to limited housing supply, land becoming more rare and expensive, pushing the development out to the suburbs. The crisis of “affordability” also continues to aggravate the lives of people. A retort to this is to provide housing which is more budget oriented with a robust typology and simplified construction resulting in a development which is responsive and innovative.

Located in close proximity to one of the many IT corridors in the city, the land parcel of 1.3 acres impelled an integrative housing comprising of 120 units divided further into 4 typologies & distributed midst 4 levels, housing that would be cost-effective to build and maintain was the prime impetus for the project.

The key intent of the design was to provide privacy for all the units and yet foster an inter-dependent relationship and harmony. The structure evolved to create a spatial composition which is visually dynamic wrapping around the site boundary forming a central court. All the units around the double loaded corridor have been configured such that they are offset from each other and no units open directly in front of each other to ensure privacy, at the same time providing ample of light and cross ventilation.

All the levels are intimately clustered with close consideration of passive design strategies, keeping in mind wind direction, sun path and mutual shading. The floor plans are planned along 3 prime nodes with the distribution of units that is broken only at turning nodal points on the floor plan so that the units with compact volume form the endpoints. The individual unit design is based on the idea of flexibility considering the present-day condition of constant change in lifestyles.

The entire structure sits on stilts, framing the view for the upper floors and leaving space on the ground floor for parking and recreational amenities offering a more human scale to the user. The absence of any vertical surfaces in the ground level also allow free movement of air and thus creating a stack effect in the central core and providing abundant fresh air to the inner core. The volume of the structure is a three-directional façade sub-divided with punctures articulated in a way that gives a sense of entirety as well as help drawing light into the building corridors thus limiting heat island effect in the central core and also helping in cross ventilation. The interior façade opening to the central core is composed with random projections/balconies which animate dynamic spatial composition.

The façade is sharply defined with a rhythm of rectangular cantilevers and angular walls which protect the interiors from harsh weather conditions forming a hybrid exterior space which acts as an extension to the common areas of the individual unit. All the decks are aligned in order to maximize day lighting allowing the user to appreciate the openness while still be cohesive to the community. The complete composition is established on modularity and recurrence. A playful composition of colours for all the cantilevers helps to reduce the visual impact of the building.

The strong building façade is softened with a landscape scheme that generates a harmony between the individual units and central core. Planter boxes outside all the bedrooms with overflowing greens form a protective screen to reduce heat radiation. The outdoor spaces are punctuated with varieties of fruiting trees and farming/productive patches to grow food coupled with different shading trees.The buffer greens and the overall landscape are planned to have three tiered vegetation with ground covers, shrubs and trees that maintain the biodiversity of the site.

The building system is thus planned with a contemporary language, rational and technical in solution signifying that affordable housing can be achieved with a strong identity which is harmonious with the environs and has an improved social solidity.