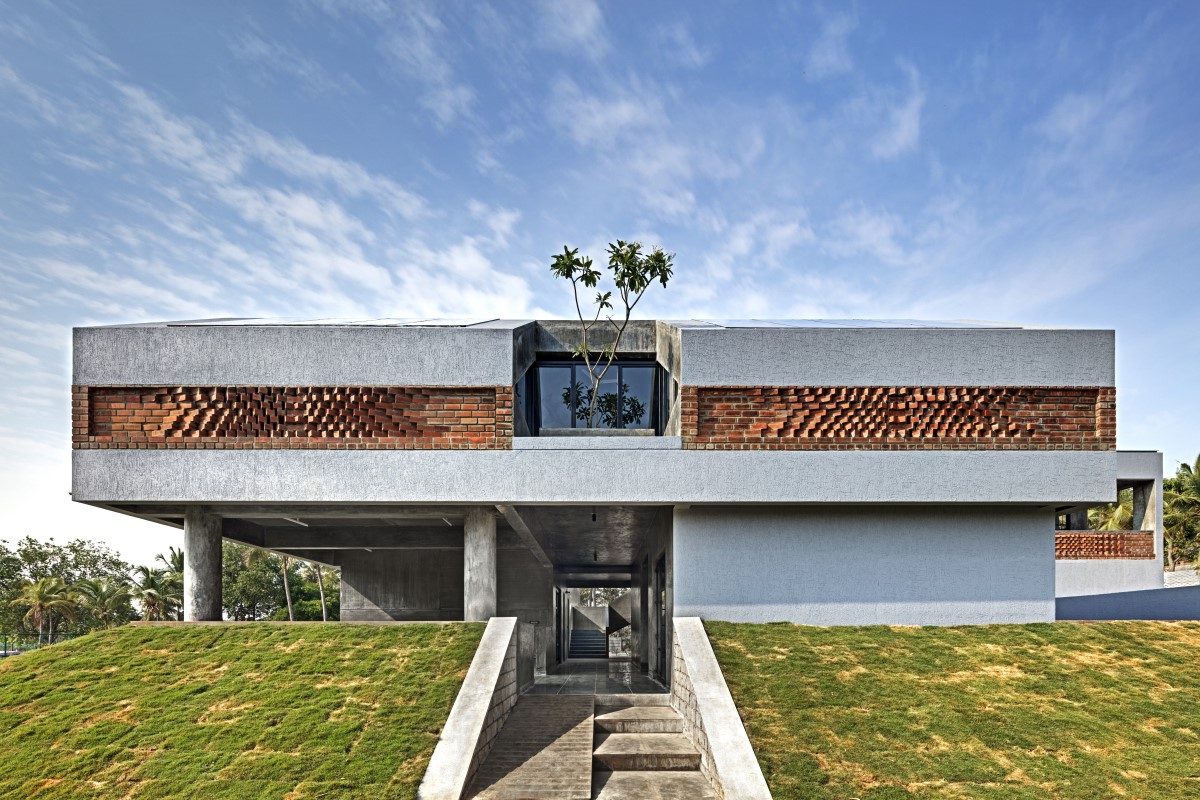 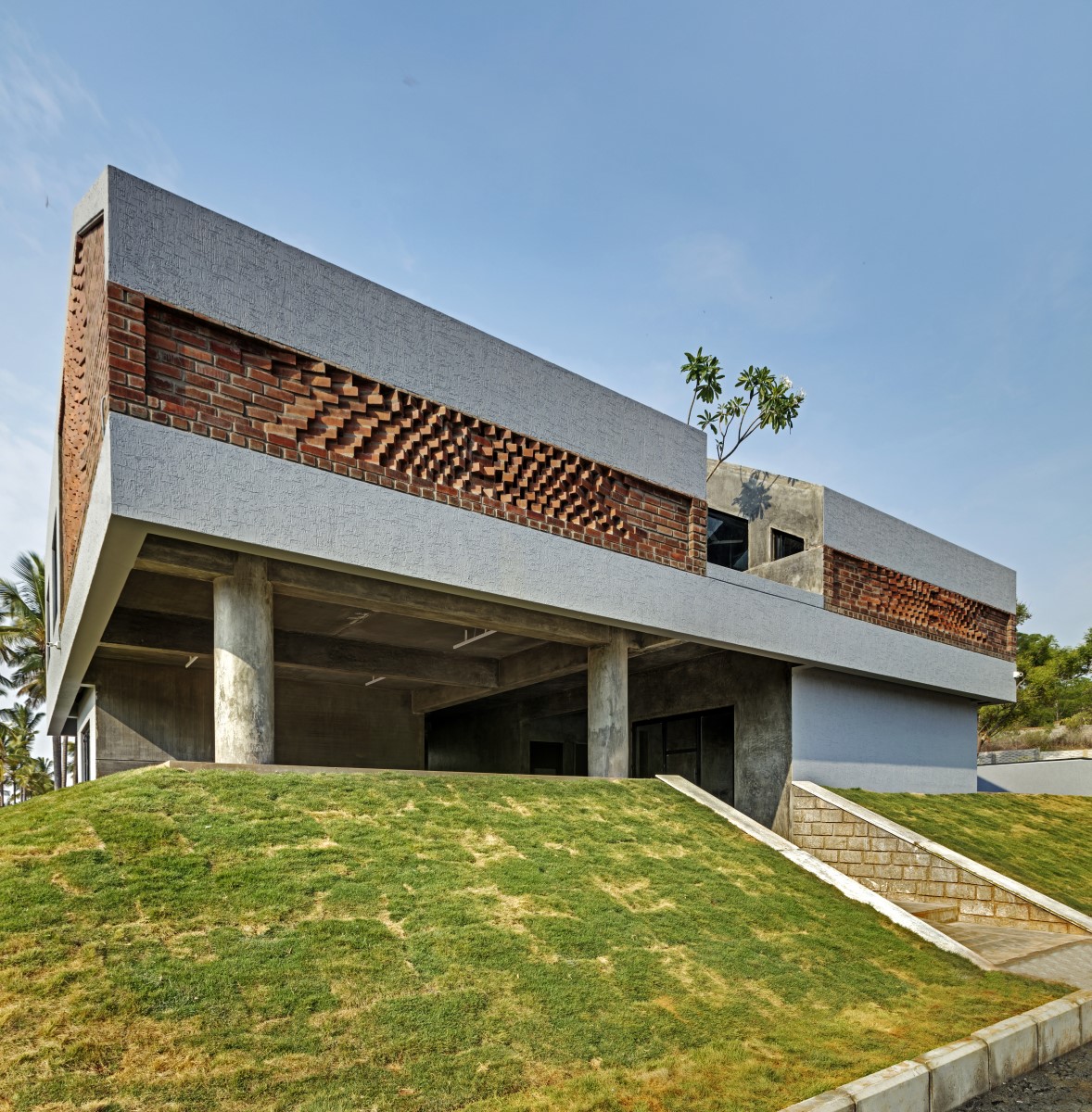 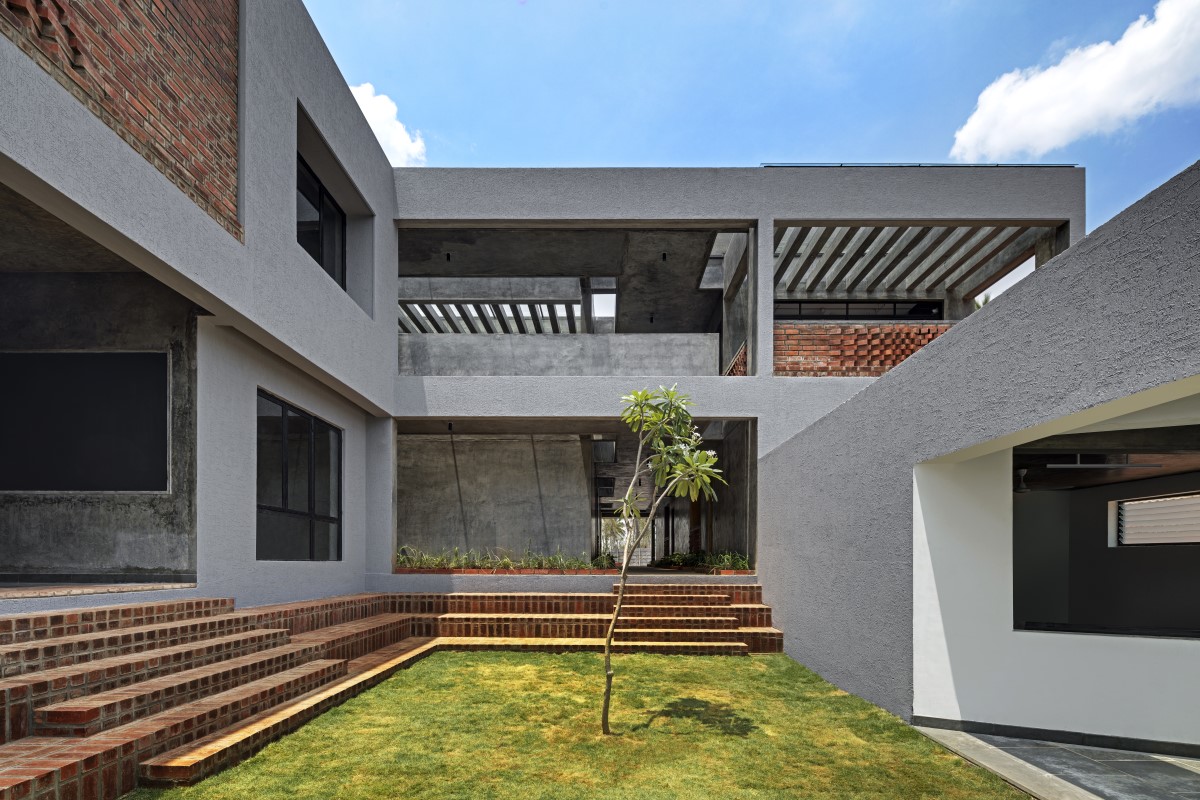 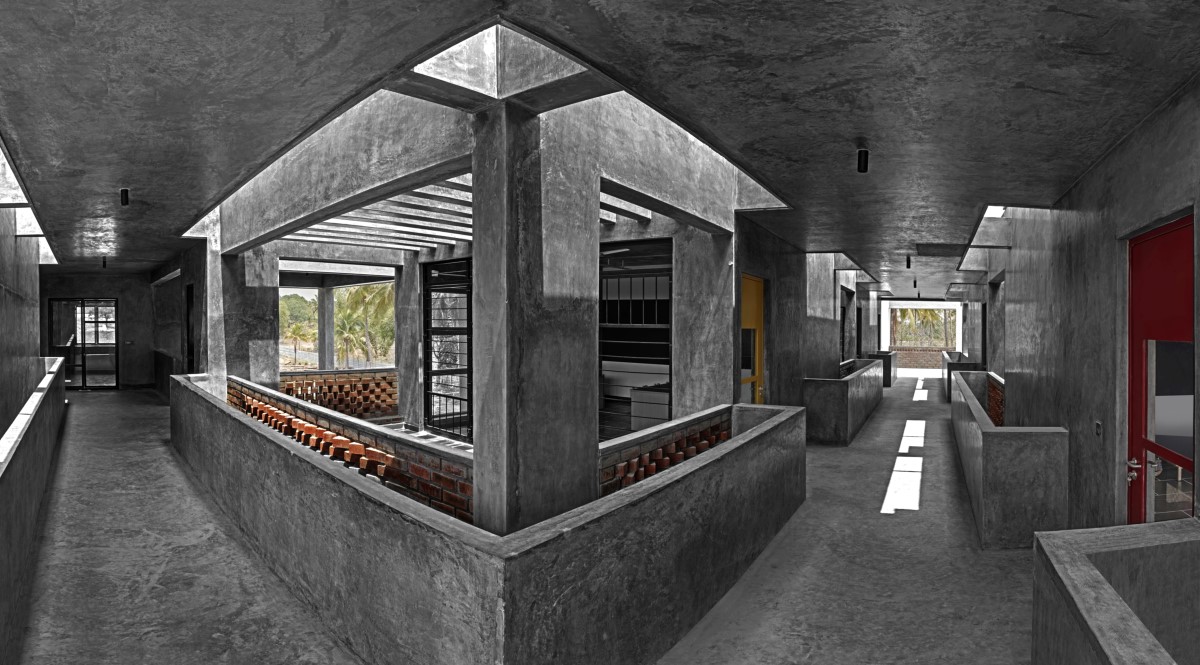 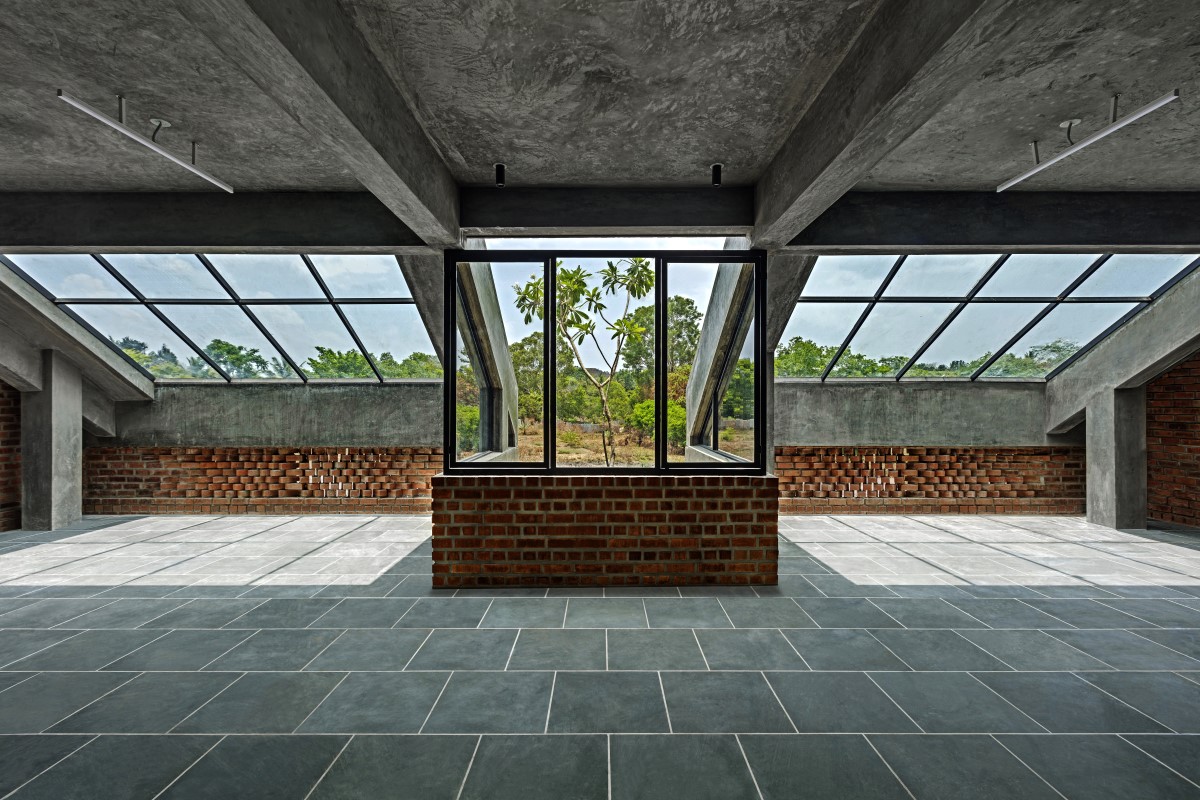 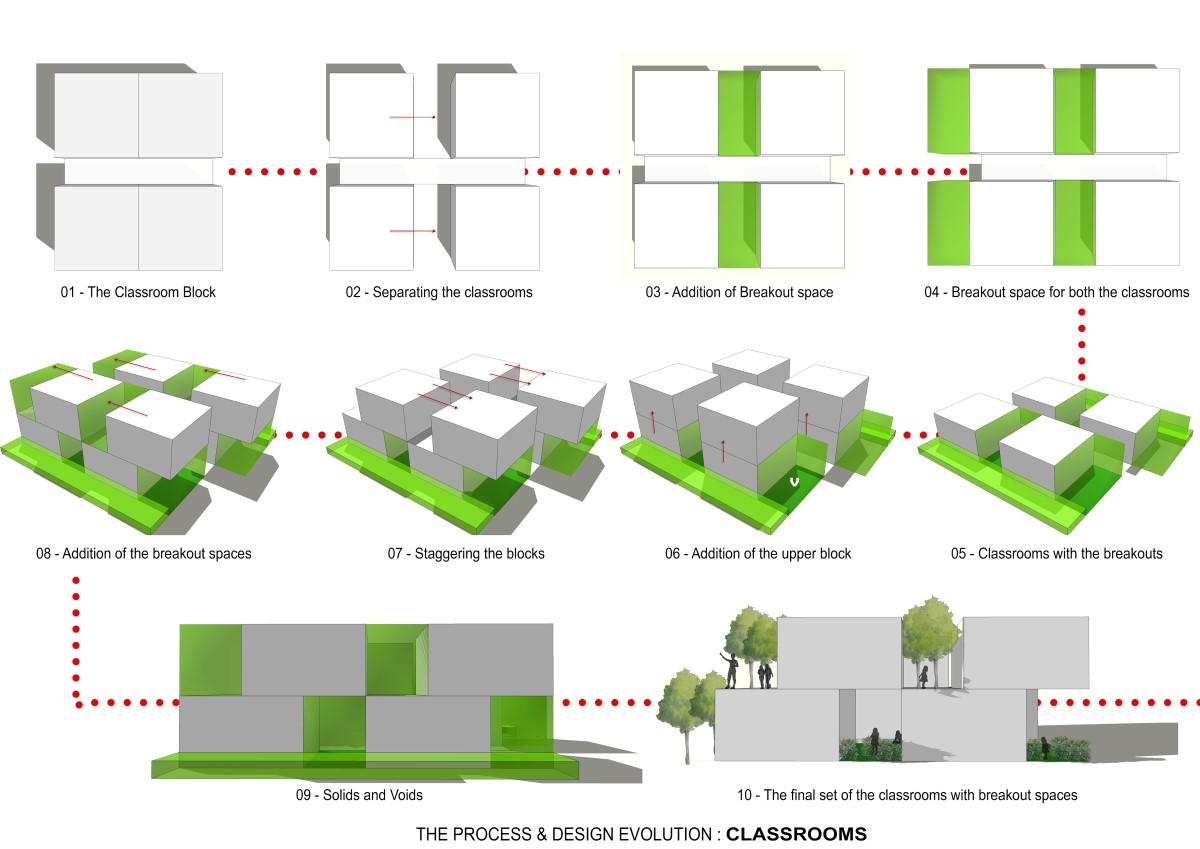 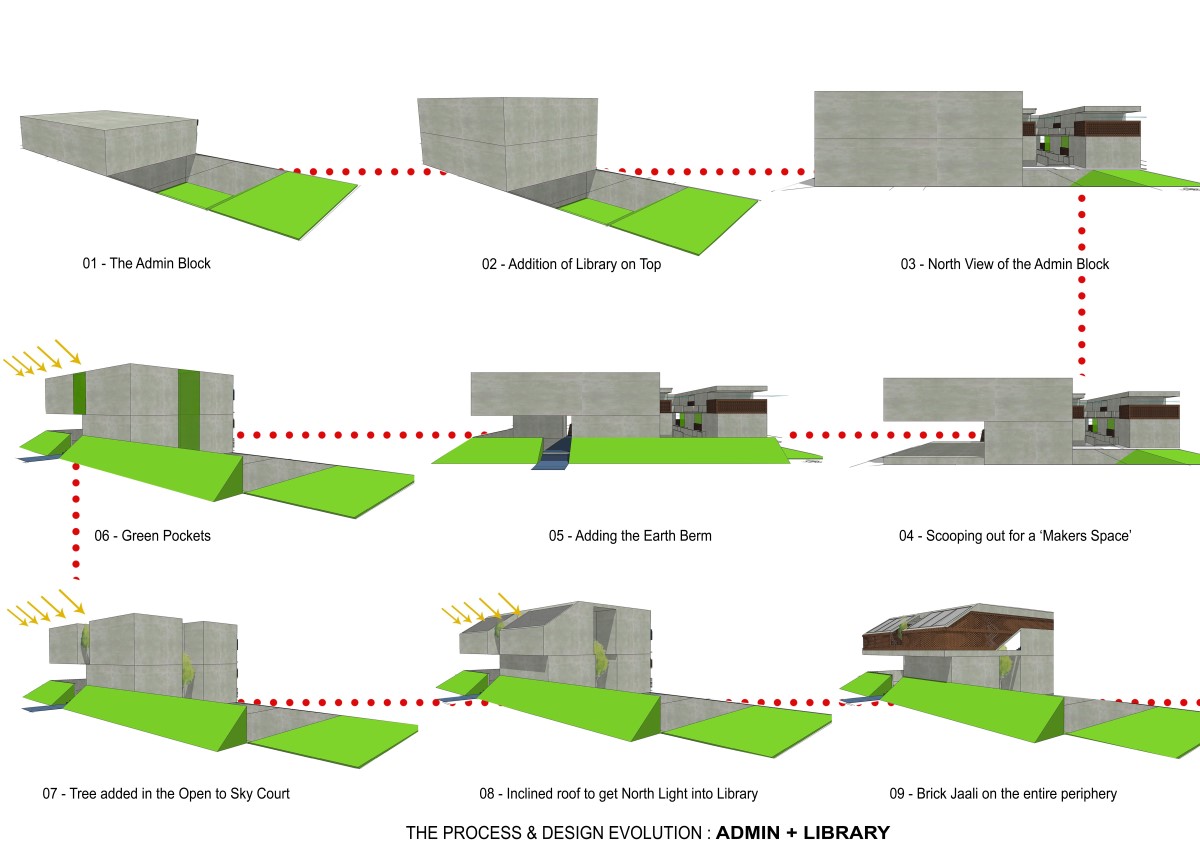 The programmatic values of the school believe in breaking away from thestandard scholastic teaching system. The design embraces the creative enterprise of ‘flexible learning’ to cater to the needs of a heterogeneous group of learners.The site is a land with steep sloping natural topography and several existing trees making it an ideal setting for imparting educating in a green environment.The premise is designed to be safe and close knit yet completely flexible creating an encouraging and interactive environ.

The design process for the built forms were initiated by understanding the climatology of the surroundings and are planned make the best use of the existing local climate. The site is north facing and has a vast open space on the East side which is a designated playground area. The design scheme is conceptualized on generating continuity with the surroundings and drawing these lines into the interiors of the building.

The administrative hierarchy is conventional for ease in functioning while, the learning spaces and the activity or extracurricular areas encourage interpersonal contact between the students. Each learning space is organized around anoutdoor court which enables the extension of the indoor space into the outdoors either for additional activities or to accommodate more students at a time within the same space.Each of these classrooms which are occupied through most part of the day is climatically oriented and houses these semi-shaded courts, making spaces comfortable to inhabit through the year.Thesebreakout areas provide light to all the classroom spaces and also enhances air movement due to induced ventilation through the brick jaali openings on the walls.

The lower levels have the administrative floors and spaces for art classes, whereas, the upper levels house the facilities for additional activities like the Laboratories, AV rooms, and Library. Both these levels are connected with a series of courts that are extendable into outdoor learning areas, blend to become a green corridor where the students can interact in a natural environment.All the common areas / corridors are treated as exterior spaces and serve a dual purpose of being a climatological feature and a strong aesthetic element. The double height cut-outs in the corridors also work as light wells and create a stack effect keeping the spaces well-lit and ventilated.

The material palate is extremely understated, and the entire feel is organic with natural light washing the exposed walls and ceilings with a spectacular play of light and shadows. These spaces are further held together with a strong design language of exposed Cement finishes, Pigmented Walls and Brick Jaali openings which merge the interior and exteriors, quite literally. The flooring in all the main rooms is planned in Kota stones laid to design and the common corridors are planned with smooth finished IPS flooring. Care has been taken to even minimize the use of Paints inside the premises, and the colored walls are all simple pigmented cement finishes mixed during plastering. This allowed us to eliminated one complete layer that forms a major element in buildings typically making it both economical and ecologically viable. The pergolas in the break-out spaces add theatre to the facade with the play of shadows.

The landscape is set to create a natural and productive environment where the learning can be extended to the outdoors making the students sensitive to ecological factors by maintaining the biodiversity of the campus.The vegetation palette of the landscape is planned to cover the entire site beyond the building outline and also grows over the structure (as earth berms) to soften the overall built form. The planting is structured as a 3 layered system with ground covers, shrubs and trees which helps in maintaining the biodiversity of the entire site. The planting palette concentrates on productive greens in certain areas, making the entire landscape experience interactive with the user all year round.

Externally, the hard paving is kept limited only to driveways hereby allowing for maximum ground water recharge. Considering the sloping site conditions, the surface run-off from the site and the over-flow from the adjacent site is channelized through swales constructed in earth and stone pitching to direct the water towards the near-by lake.

The planting is planned to maintain the biodiversity within the site. The areas near the play areas are bufferd with a forest in the Akira Miyawaki technique made with native species of trees housing around 350 trees, the art workshop areas extend into an organic farm - making farming an integral part of the academics, the steeper sloped areas are managed with sculpted earth in terraces that doubles up as cheering and viewing areas for the linear sports area below shading with foliage and flowering trees that extend to form the backdrop of the performance areas.

The building thus functions as a selective environmental filter, enhancing the best components of the regional climate to address heating and ventilation needs and thus reducing the dependency on mechanical sources for ventilation making it an efficient building.